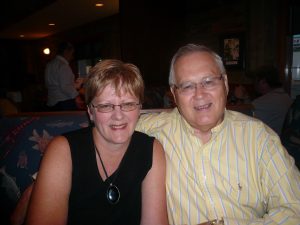 Michael (Mike) Kaye discerned a call to ministry and came toCrandall, at the time United Baptist Bible Training School(UBBTS), after some encouragement from his pastor and friend, Rev. Fred Smith. Mike was nervous to go back to school having not graduated high school. Instead, he had spent a couple of years in the work force as an Air Traffic Control Assistant and later as an Insurance Sales Manager.

As an older student, Mike faced different challenges in continuing his studies.  He had recently married and had left behind a good job before starting his studies. Despite these challenges, encouragement came from folks like Dr. Stuart Murray, president of UBBTS/Atlantic Baptist College (ABC), who allowed Mike and his wife, to move into the Dean’s apartment in the men’s dorm. Being aware that Mike had directed youth choirs and was in a quartet, Dr. Murray further encouraged his mature student to be the school’s choir director.Later he also offered Mike a summer job of travelling aroundthe Maritimes visiting Baptist youth camps to recruit and meet with students for the school.

Initially, Mike found the courses challenging but in the spring of 1969 he graduated with an Associate of Arts diploma and headed toward Boston to study at Gordon College. Upon obtaining his Bachelor of Arts majoring in Psychology at Gordon, he accepted a position back at his alma mater –Crandall, at the time Atlantic Baptist College.  He started working as Dean of Students and with an opportunity to teach Psychology 100 broadening his field of study and experience.

After two years, Mike would move on to teach a Social Work extension course at St. Thomas University. He would later go onto be a Regional Training Officer for the Department of Social Services, a Managing Director of Family Enrichment and Counselling Service, a Social Work Supervisor and Palliative Care worker. Mike also furthered his studies by earning hisMaster of Social Work and Master of Divinity degrees. It was in 1983 that he settled into full-time ministry and served in Nova Scotia and Ontario. Today, Mike, though supposedly retired, has occasional opportunities to supply preach in the Albert County Association of Baptist Churches in New Brunswick.

Mike is happily married to Joyce (MacDonald) who is a retired neonatal nurse. They have two amazing children; Kristin – who attended Crandall University in 2004 and John who lives in Finland working for the Canadian Embassy. Mike and Joyce have enjoyed a Christian music ministry together through the years but also they have been a part of a Moncton community choir called MetroTones.

When reflecting on his time at Crandall (UBBTS/ABC) Mikefondly recalled, “It taught me the value of hard work in my academic pursuits and it was an experience that gave me confidence after failing in high school.  The friendships I made there were as a student. However, those friendships continued on during my time teaching and through the years.”