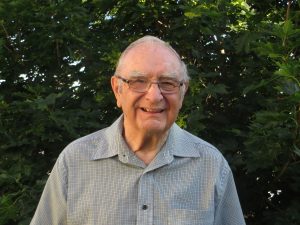 Ray’s first memory of Crandall University (at the time, United Baptist Bible Training School), was in 1949, when he attended the official sod turning ceremony of the first building. Ray started his studies at UBBTS in 1953, coming from a much larger Moncton High School. Ray appreciated Crandall’s smaller and more personal environment which allowed him to develop fellowship and friendships with both teachers and students. Many of these friendships have remained strong throughout the years and continue to have a great influence on him. After graduating with his high school diploma in 1956, not knowing what to pursue next, Ray returned to Crandall for a year of Bible study.

After his year in Biblical Studies Ray enrolled in the one year teaching program at the Teacher’s College in Fredericton. It was during this time that he met his wife Evelyn at Baptist Young People’s Union at George Street Baptist Church. They both returned to Moncton after graduating to begin their teaching careers, and they were married August 19, 1961. They have since been blessed with three wonderful children, Chris, Paul and Susan and three beautiful grandchildren, Brendan, Julia and Bryce.

Ray spent 35 years teaching in the public schools, mostly in Junior High grades. For thirty of those years he was a principal or vice-principal of the school. Beginning in 1960, while still teaching, Ray took night courses and summer school classes for 13 years at Mount Allison University and University of Moncton, graduating with two education degrees. In 1988, four years before his retirement, he took training at Codiac Transit Moncton to be a city bus driver. Over the next four years he would drive a bus part time, and started full time in 1992 when he retired from teaching. He spent 15 years with Codiac before stepping away in 2007.

After Evelyn’s retirement from 20 years of church administration at The Journey Church, they have continued to be active in their church, and enjoy travelling, cheering on their grandkids during their sporting activities and spending time at the cottage. The knowledge and experiences Ray gained at UBBTS have continued to be valuable as he serves in many ministries at his local church. Ray has good memories of the time he spent in the UBBTS choir, with Harold Arbo by his side he became a bass singer, and he has continued to be a member of choirs around the city.

Ray is thrilled that his family’s connection with Crandall did not end with him. Their daughter Susan graduated with a business diploma and an Interdisciplinary Studies Degree from ABC, and worked on staff for four years at ABU. Their grandson Brendan graduated with his Bachelor of Business Administration degree in 2018 and is now working toward his Bachelor of Education degree.

Throughout his working years, Ray felt God’s guidance in many situations in his profession and felt that the Lord blessed him in many ways. He praises God for His guidance and answers to prayer. Ray’s prayer is that God continues to bless Crandall University in the years to come.