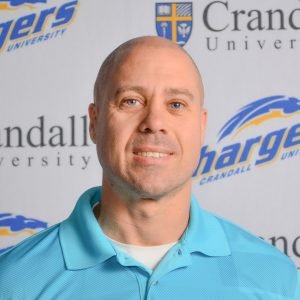 Crandall University is pleased to announce Damian Dyke as the new Head Coach of the Chargers Men’s Soccer team. Damian graduated with a B.A. in International Business from Concordia University, where he was awarded a soccer scholarship and played for the Cavaliers.

Damian comes to Crandall with over 25 years of competitive coaching experience.  In that time he has coached 8 different teams to provincial championships and national tournaments, with teams from Newfoundland and Labrador and New Brunswick. He has worked with soccer players preparing and training for the International Military Sports Council (CISM) Military World Games, the second largest sporting event in the world, second only to the Olympics.

Since moving to New Brunswick in 2017 he has coached for Codiac Soccer, coaching multiple teams to provincial championships, and worked as Technical Director for the club for 18 months. This past fall Damian coached the Mathieu Martin Varsity Soccer team. Damian is also the owner and operator of NXT Level Soccer Academy, a program that focuses on the development of athletes of all ages and skill level.

We are very excited to have Damian join our team. We also wish to thank Kevin Talbot for serving as head coach of both the men’s and women’s soccer teams for the past two seasons. Next fall he will return with a sole focus as head coach of the women’s team.