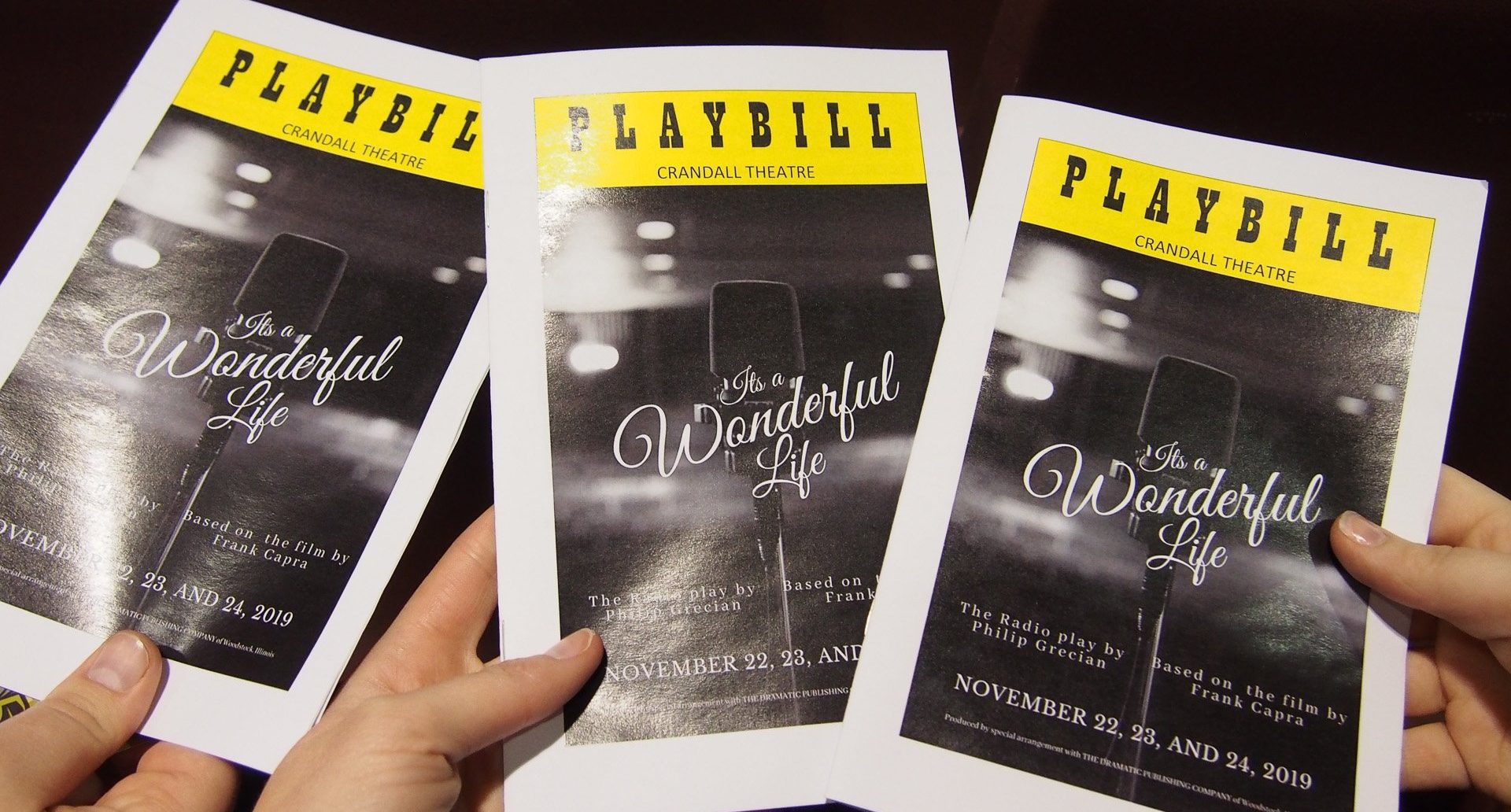 Crandall Theatre, the passionate and talented student-led organization that has brought such hits as The Lion, The Witch, and The Wardrobe and Peter and The Starcatcher to the stage is back again, this time with a fan favourite: the Radio Play by Philip Grecian based on the classic Frank Capra film, It’s a Wonderful Life.

This skillfully executed show beautifully delivered the heartwarming Christmas tale that many know and love, but with a unique and refreshing twist: everything was done within the context of a radio show. The cast’s devotion to their roles was impeccable as they conveyed their character’s emotions almost entirely though their tone, inflection, and facial expressions. Foley artists Erin McLearn, Kathryn Chase, and Maggie Nemeth deserve a special shout out for delivering a number of sound effects so accurate and well timed that you could have closed your eyes and had just as immersive an experience. One thing is for sure, Crandall Theatre certainly accomplished their goal of making the audience feel as though they were listening to an authentic old-timey radio broadcast, with advertisements and all!

Following the final showing, I sat down with George and Mary Bailey themselves to discuss this year’s Crandall Theatre production. George Bailey, played by fourth year Communication Arts – Theatre student Ben DeJong, expressed his admiration for the University’s theatre company saying, “what I love about Crandall Theatre is working alongside likeminded people. Sharing the same goal as others brings about a feeling of unity that you don’t often get to experience. It is a very special thing to be a part of.”

Erika Carruthers, first year Communication Arts – Theatre major and Ben’s onstage wife Mary Hatch-Bailey, commented on her very first performance with Crandall Theatre, saying “I was incredibly excited to be a part of this production. Watching It’s a Wonderful Life each year on Christmas eve is a family tradition, so the story has always meant a lot to me. The show was completely worth all of the time and effort and I’m so glad that I was involved!”

While there were many newcomers to Crandall stage this year, there were also several seasoned veterans who will be graduating and leaving Crandall Theatre behind, sure to look back on their time with fond memories. Beth MacDonald, the voice and face of Tilly, is one of these founding members who has played a role in all three Crandall Theatre productions thus far. Reminiscing on her time with the group, she explained that it breaks her heart to be leaving Crandall Theatre, adding “it is really strange to be graduating and passing the baton to up and coming young actors, but I am confident that they will carry it with pride!”

Congratulations to the entire cast and crew of this year’s production directed by the extremely talented Emmelia Ohlhauser! Best of luck goes out to those involved in the fast approaching production of The Somewhat True Tale of Robin Hood, opening March 20, 2020. Be sure to get your tickets when they come available; if it’s anything like this production, it will be sure to entertain.

See the trailer below from the weekend’s production: