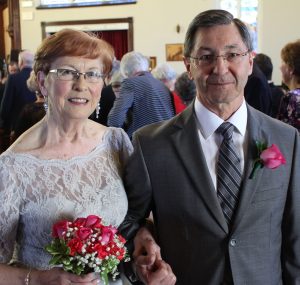 “I attended UBBTS for 1 year, ’63-’64, taking the Grade 13 program. I attended Gordon College the following year in the Math-Physics program but didn’t continue for financial reasons. Returning home to Sackville, NB I began a career in finance. After a year with a finance company I was offered a job with Scotiabank in 1966. After 37 years, numerous transfers and positions, including; Personal Loans Officer, Branch Manager, Audit Manager NB & PEI, and Sr. Commercial Credit Manager, I retired from Brunswick Square Branch, Saint John in 2003.

“I married a Sackville girl, Linda Turner and we have three wonderful sons, the first two by adoption.

“My first bank transfer was to Chatham. Since there was no Baptist church there we attended Newcastle Baptist where Rev. Lew Farrell was the pastor. He ‘engineered’ a Junior Deacon position for me and took me under his wing. I have served as a Deacon in every church we’ve attended since then. My wife, Linda, an accomplished pianist, led and accompanied choirs and singing groups in those churches as well.

“In 2005 Linda was diagnosed with Early Onset Alzheimer’s Disease. Two years after retiring I became a full-time caregiver. She lived ten years with the disease. Suffice to say that was an unexpected life event, testing faith and physically and emotionally draining. God proved faithful and sustained me and the family throughout. Subsequently, two years ago, I married a wonderful Christian lady who had a similar experience in that her first husband passed away after having had Alzheimer’s.

“Crandall, or the Bible School as we referred to it, is one of my most valued experiences. The Christian teaching and atmosphere, choir and gospel teams, and many wonderful (lasting) friendships helped ground me and shape my life. In particular, my love of God’s word and His revelations to me got a real boost at UBBTS.”