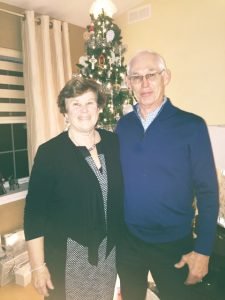 Gil’s life has been shaped by the connections that he’s made with others. After graduating from Crandall, UBBTS at the time, he did not feel like he was ready to continue his education right away, so he worked for three years at the Bank of Nova Scotia. This provided him with great on the job training and understanding of finances. After three years he enrolled in a computer programming course in Halifax and it was there he made a connection with a friend who encouraged him to go to Ontario if he wanted to work in the computer industry. Gil went to Toronto and worked for a number of years, before taking an opportunity in Calgary, Alberta to work for Gulf Oil. Gil spent two years there before again returning to Toronto to work with Gamble McLeod Ltd. as a programmer analyst.

It was upon his return to Toronto that Gil reconnected with a classmate from his UBBTS days, a young lady named Dianne Steeves. Dianne and Gil quickly realized that they were meant to be together, and were married. At this time Dianne was a high school teacher, and did not enjoy the fast pace life style that came with living in Toronto and after a couple years moved back home. When they moved back to Moncton Gil worked at Apex Industries as a programmer and systems analyst for four years. He then went to work for Imperial Insurance Services as an Information Systems Manager for 3 years. It was in 1980 he started his 25-year career at Moncton New Brunswick Community College where he worked as senior instructor in Information Technology Management until retirement in 2004.  It was also at this time that he completed his Computer Science degree from Pacific Western University.

Gil has been a very active member of both his church and community. He spent 10 years as a member of the Gideons and has always enjoyed both skiing and skating. In fact, he has spent time as both a ski instructor and Canadian ski patrol, and has also worked 39 years as a referee in the Canadian Amateur Hockey Association (CAHA). One of his favorite community involvements was camp director for Hockey Ministers International (HMI) Camp, which took him as far as three trips to Sweden. He particularly enjoyed being able to invest in the next generation at a camp that was developing both their faith and athletic skills.

Gil and his wife Dianne had three children together, Mark, Peggy and Tim and 6 grandkids. Sadly in 2010 Dianne passed away due to Alzheimer’s. This was hard for Gil as Dianne had always been instrumental in keeping him on the straight and narrow path. Gil says that God looked after him, and that what happened next was so “fairy-tale like” that it had to be God. When Gil and Dianne moved to Moncton they lived on the same street as the Foreman’s. Sandra and Dianne had been good friends, and their kids would often spend time together. As it turned out Sandra was single, with some gentle nudging from some of their kids Gil and Sandra went out for a coffee. They have now been married for seven years. Sandra is also a proud Crandall graduate with a Bachelor of Arts in Organizational Management (ALPS Program). She has three children Terry, Jeff, and Andrea, as well as 9 grandchildren. Gil and Sandra now have the joy of spoiling 15 grandchildren.

When thinking back to his time at Crandall (UBBTS) Gil thought that it was an excellent environment to learn in because of the Christian influence. When he enrolled as a shy 15 year-old farm boy he knew he had to learn fast in order to keep up with the higher, academic standard that Crandall set. He also benefited from the mentorship of Earl Morrison, who taught math and physics and pushed and challenged him to want to achieve more than just a pass. Gil remembered him as a gentleman and mentor. There were two other men; Jack Allen, and Jack Ayles who continued to support him in both his personal and work life.  As much as Gil appreciated the academic rigor, the Christian influences from good friends, and mentorships, for him the best thing that happened during his time at Crandall was meeting his first wife Dianne.