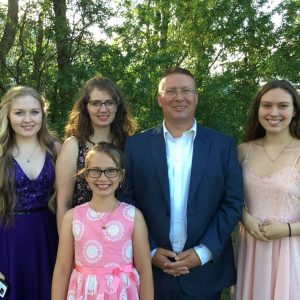 Shortly after graduating from Crandall my family (Julie and our first daughter, Maria) and I made our way to Portage la Prairie, Manitoba to work with Youth for Christ. Our intention was to eventually return to Atlantic Canada to pastor within the Atlantic Baptist Convention. Our Lord had other plans, however, as we ended up moving further west to pastor in Saskatchewan. We spent 6 years with a Church of God/Anderson congregation and then 7 years with an AGC church in SK. In May 2019, while not returning to Atlantic Canada, we did return to the Baptist family as I took a position with First Baptist Church (CBWC) in Regina, SK.

Over these years, my wife and I have had 3 daughters (Maria, Jennifer, and Andrea). Our oldest daughter has returned to Atlantic Canada and specifically to Crandall University where she has completed 2 years in her BA.

I’ve continued to study since leaving Crandall. I’ve completed a MA in Christian Ministries (Pastoral Counselling emphasis, Briercrest Seminary), a MA in Theology (Briercrest Seminary), and a DMin in Leadership and Spiritual Formation (George Fox University). What lead me to doctoral studies in the area of spiritual formation was in part my interest in the work of Renovaré.

In 2012 a conversation began between myself and Renovaré US around Christian spiritual formation in Canada. This lead to an invitation to draft a proposal for launching Renovaré Canada which I then presented to the Renovaré US board in 2013. In 2014 Renovaré Canada was incorporated and since then I have been serving as the founding/executive director of Renovaré Canada (www.renovarecanada.ca).

My time at Crandall (then ABC/ABU) gave me a foundation in a few ways. First, it provided me sound teaching which grounded me not only in biblical studies but in shaping and developing a worldview. Secondly, the professors taught me so much outside of the classroom as well. Their ability to display Christ in their interactions with me as a student provided not only a nurturing presence for my own growth into Christlikeness but also served as an example of the kind of person I wanted to become. Lastly, Crandall provided a place to connect with other students who were on a similar journey – some of whom became deep friends.