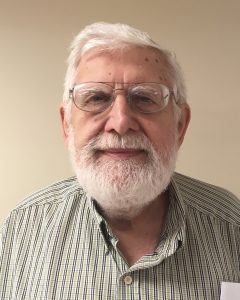 During his time at Crandall, Doug met a number of people who impacted his life; however, he notes that Earl and Millie Morrison saved his academic life and paved the road for his professional and music life. When Doug graduated from Crandall University, at the time UBBTS, he embarked on a life long journey as both a teacher and student.

After his time at UBBTS Doug continued his studies at New Brunswick Teacher’s College for his Teachers License (’62). Following this, Doug began his teaching career while attending University of New Brunswick for his Bachelor of Teaching (’68). Later, while at the University of Moncton he received both a Bachelor of Education (’71) and a Master of Education (’81). During that time he also received a principal’s certificate (’78) and driver’s education certificate (’69).

Doug spent time teaching around the province teaching grades 5-11. His longest tenure was at Lower Coverdale School in Albert County where he spent 15 years, as both a principal and a grade 6 teacher. Doug also taught drivers education both in high schools and through organizations like the YMCA. Doug continues to teach drivers education to this day; however, he retired from teaching in the classroom in 1995.

After finishing his professional education with his Master of Education, Doug had a desire to continue to learn. That desire brought him back to Crandall, at that time Atlantic Baptist University. He said he chose to return to Crandall because “of my determination to be exposed to more than a casual knowledge and understanding of the Christian religion.” Doug was able to continue to teach while taking course at Crandall part-time. While he was challenging, supporting, and expanding the worldview of his students, he found that he was being challenged, supported and pushed to expand his own worldview as he worked towards another Bachelor’s Degree. When Doug retired, he moved to full-time studies and in 1996 he received a Bachelor of Arts in Biblical Studies from Atlantic Baptist University. He then went on to study at Acadia University and received a Master of Arts in Theology (’04).

In 1965 Doug married Sheila Faye Jones, and together they have two children, Jonathan and Heidi. Throughout the years Doug has been active in his community primarily through his passion for music. He again sees the impact that the Morrison’s had on his life. He has been a pianist or organist at Saint Matthews Lutheran Church and at Brentwood United Baptist Church. He has also been active in local choirs as a bassist, having been involved in the UBBTS choir, First Baptist Church Choir, Greater Moncton Chorale Society, Mount Allison University Choral Society and Atlantic Baptist University Choir.

The impact that Doug’s time had at Crandall is immeasurable. For Doug it was the people he was able to meet here that made a difference. As noted, Earl and Millie Morrison played a large role in his life, professionally, academically and musically. He was also able to learn from Rev. Leslie Wilton, Rev. Don Jackson and Dr. Stephen Dempster and views these individuals as “models par excellence.” For Rev. Wilton and Rev. Jackson, Doug noted his admiration for the way they engaged with students and the community in academic, social and political endeavours. Through classes and conversations with Dr. Dempster, Doug admired the way he was able to responsibly present Biblical content and “present both basic and wide-ranging lines of thought in the world of academics.” Doug is grateful for the time he spent at Crandall, and for the people he was able to meet there who played the role of not just educators, but also of mentors, supporters and encouragers.