While Convocation weekend is a time of celebration for many new graduates, a second Crandall tradition takes place the evening before the convocation ceremony – the presentation of the Distinguished Alumni Award.

Presented to Crandall alumni who have demonstrated devoted service to humanity – and are recognized for success and leadership in their profession, the Distinguished Alumni Award recognizes outstanding accomplishments on the part of the honourees.

For 2018, during an evening of celebration and storytelling, awards were presented to Daniel Ingersoll and Sandra Sutherland. 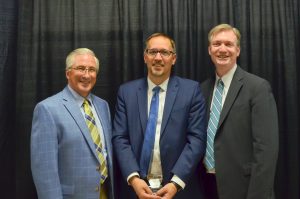 Dan Ingersoll was born and raised in Seal Cove, Grand Manan. He is the youngest of four children born to Morris, a lobster fisherman, and Marie, a school teacher. Through the influence of Pastor Kaj and Joan Binderup, Dan’s world stretched beyond his home community. He knew that his life’s path would lead him off the Island, and through the influence of Pastor Kaj, Dan chose to study at Atlantic Baptist College (ABC).

Dan graduated from ABC in 1984 with his Associate of Arts diploma. He then studied at Mount Allison University in Sackville, New Brunswick, graduating in 1986 with his undergraduate degree. He went on to study at Osgoode Hall Law School in Toronto, Ontario where he graduated in 1989. After graduating, Dan moved to Halifax to begin work at Cox and Palmer Law firm where he still is working nearly 30 years later.

Dan married Cindy in 2002, and together they have three boys: Luke, Sam, and Max.

Beginning in the 1990s, Dan provided counsel to the Baptist Convention leadership and has served as its parliamentarian at the annual Oasis business sessions. As a result of his relationship with the Canadian Baptists of Atlantic Canada, he has been able to provide legal advice to many churches and has served on the Board of Trustees at Acadia Divinity College.

He has volunteered in the wider community, as well, promoting justice and seeking to give people a second chance. This led him to volunteer for ten years with an organization that concentrated on restorative justice with young offenders. Dan now works with an organization which seeks to make legal information available to everyone, so they can live better, fuller lives. 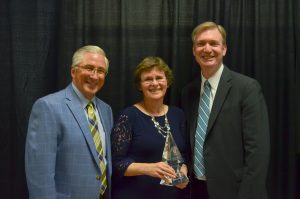 Sandy was born in Fredericton, New Brunswick to parents Harry and Dorothy Smith. Along with her two siblings Eric and Janet, Sandy lived in various communities throughout the Maritimes, graduating from high school in Campbellton before attending ABC.

After completing her two-year Associate of Arts diploma, Sandy studied at Gordon College in Boston, Massachusetts. completing an undergraduate degree in English. Sensing a call to ministry, she remained in Boston to study at Gordon Conwell Theological Seminary, earning a Master’s degree in Religious Education.

Upon Gordon’s graduation from Acadia Divinity College, the pair moved to Springhill, Nova Scotia. It was during that six-year ministry time that their children, Andrew and Laura, were born. From there they moved to Truro and served at First Baptist Truro, and then to West End Baptist Church in St. John’s, Newfoundland and Labrador, where both Sandy and Gordon served on the pastoral team for 13 ½ years. While serving at West End, Sandy pursued ordination within the Baptist Convention. This was a powerful moment of affirmation and authority in her life and ministry. Upon completion of their ministry in St. John’s, Gordon and Sandy returned to Riverview where Sandy is currently serving as the Associate Pastor at First Baptist Church Moncton.

Sandy enjoyed her years of serving on the Board of Governors at Crandall University and the Council at the Convention before then serving as Vice President and then President of the Convention in 2012-13.

Atlantic Baptist College, now Crandall University, has played an important role for her family. Her grandmother, Mildred Hall, was a cook on the old campus. Her sister Janet, brother-in-law Allan, and daughter Laura all attended as students. As she looks ahead to the future of Crandall University, Sandy’s hope for the school is that it would continue to be a place where real spiritual formation happens in students’ lives. 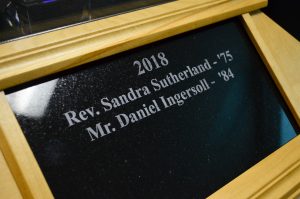 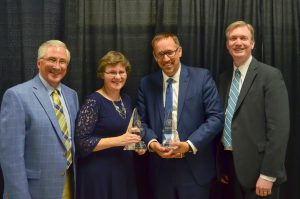 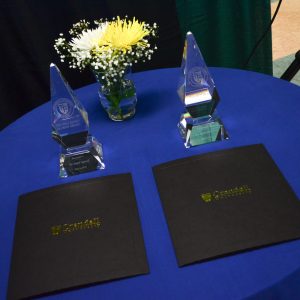