MONCTON – Since January 2016, the campus apologetics ministry Ratio Christi has had a local Chapter operating here on the Crandall University campus. The central focus of the ministry on campus is the weekly Ratio Christi Student Apologetics Club, wherein all students from various backgrounds and faiths are invited to engage in respectful discussion on a variety of subjects pertaining to the truth of the Christian faith.

During the last RC Apologetics Club meeting of the 2017-2018 academic year, Ratio Christi conferred the Legatus Christi Certificate to Melanie Blagdon, one of Crandall University’s graduating students. The Legatus Christi Certificate (Latin for Ambassador of Christ) is an honorary award given to students who have demonstrated Christ-like character, active engagement in evangelism, a passion for Christian apologetics, and an ability and willingness to help equip others.

“Melanie has certainly set a standard for this award by being a shining light for Christ in everything she does, both on and off the university campus,” said Cody Guitard, Chapter Director for Ratio Christi at Crandall. “She has been heavily involved in ministry at Crandall University, especially in terms of the Crandall Student Ministries (Harvest House, Prison Ministry, Briarlea) and Ratio Christi, wherein she filled the role of President of the RC Apologetics Club for the 2017-2018 academic year. She has also been responsible for bringing numerous students, both Christian and non-Christian, out to the RC Apologetics Club, inviting them to join the on-going dialogue about reason and Christian faith.”

“It was an honour, really,” said Blagdon about receiving the award. “It’s a reminder of how to live your life as a Christian, and being ready to answer people’s questions gently and with respect.”

Ratio Christi operates largely on campuses in the United States, but has international chapters in countries all over the world. The chapter at Crandall University is the first in Canada, but Blagdon hopes that will change: “I’d love to see Ratio Christi on every campus in Canada. It’s exciting to be part of the beginning of that.”

Blagdon is also the first recipient of the Legatus Christi Certificate outside of the United States. 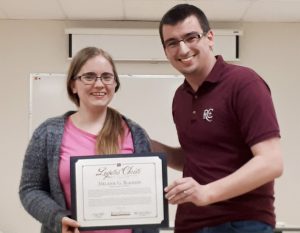 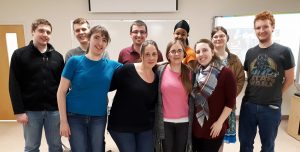 The Ratio Christi Apologetics Club, where students are invited to engage in respectful discussion on subjects pertaining to the truth of the Christian faith