Moncton – Crandall University continued its series of Public Lectures on Thursday with book launches from two professors, Dr. Stephen Dempster and Dr. John Stackhouse. With nearly 150 in attendance, the speakers shared the stories behind their latest publications, and treated the audience to readings of select passages from their respective works. 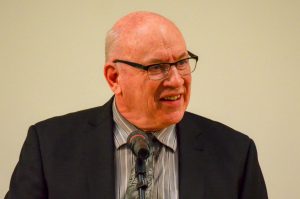 Dr. Stephen Dempster opened the evening, discussing his commentary on the Book of Micah, part of the Two Horizons Commentary series. The book, he dedicated to his daughter Jessica, who had previously worked with Wycliffe Bible Translators and encouraged him to consult for some of their translation projects. In discussing the reasoning behind the book itself (and its placement in the Two Horizons series), Dempster shared his admiration for the series’ uncommon desire to create a resource that combined both exegesis and theology – seeking to understand the biblical text in its own right, as well as its implications for the world today.

Fake News, False Prophets, and the Voice of Truth

Titling his talk “Fake News, False Prophets, and the Voice of Truth,” Dempster shared a passage from his book discussing the challenge of discerning between true and false prophets, both in the biblical context and in our culture today. At the core of the matter, he stated, was the fact that a true prophet has a fundamental love for the people they are trying to reach, while false prophets were ultimately out for themselves.

Ethics for the Real World 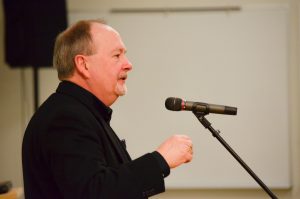 The second speaker of the evening, Dr. John Stackhouse, introduced his book, Why You’re Here: Ethics for the Real World. Presenting this new book as the distillation of a much larger volume into a more accessible (and affordable) form, he explained the journey that led to its creation.

Sometimes You Just Have to Kill Somebody

His own talk titled, “Sometimes You Just Have to Kill Somebody,” Stackhouse addressed ethical issues faced by modern Christians and the differing philosophies held throughout the Christian tradition. Using the story of mid-century theologian Dietrich Bonhoeffer’s involvement in a failed plot to assassinate Hitler, he dealt with the ages-old dilemma of Christian obedience to the tenets of scripture – ought we to obey every command unswervingly, or are there circumstances in which an otherwise unthinkable act may actually be deemed the best choice?

Both professors took questions at the end of their talks, inviting comments from the gathered crowd on the topics discussed that evening.