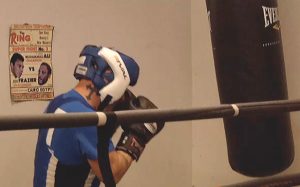 While athletes will have the opportunity to compete in local and maritime competitions, they will also eventually be able to participate in inter-collegiate competitions offered by the North East Division of the US Collegiate Boxing Association which includes Syracuse University, University of Massachusetts, University of Vermont and the United States Naval Academy at West Point.

For more information on the Crandall Boxing Club,
Call: 506-858-8970 ext 298 or
Email: crandallboxing@crandallu.ca