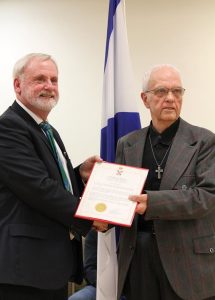 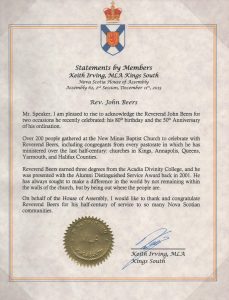 Congratulations to Rev. John Beers (Class of 1957) who received high recognition from the Government of Nova Scotia! Rev. Beers was the only pastor recognized by Kings South MLA, Hon. Keith Irving, for his 50th Anniversary of his ordination and service to many Nova Scotian communities.

Rev. Beers credits his years at United Baptist Bible Training School (now Crandall University) for giving him a strong foundation. He explained, “The purpose in sharing this story is to highlight Crandall’s educational academic standards.”

It’s no wonder his ministry has been a fruitful one when you hear his message for today’s church, he says, “Don’t remain within the walls of the church, but be out where the people are and seek to make a difference by our presence in word and deed. As Jesus said, ‘be salt and light.’”

Congratulations, Rev. Beers, on this well-deserved recognition – to Him be the glory!

After United Baptist Bible Training School (UBBTS), I studied at Acadia University and obtained my B.A., M.Div., and M.Th. degrees. From 1960-2012, I worked in many churches: Caledonia-Kempt-Maitland Bridge-Northfield Baptist Churches, Lawrencetown / Inglisville Baptist Churches, Pioneered Immanuel and Regal Road Baptist Churches in Dartmouth, Kingston / Melvern Square Baptist Churches, Zion Baptist Church in Yarmouth, to name a few. Even in retirement, I continue to be involved with Sunday Supply, the Eastern Valley Baptist Association, and the Examining Council of our Convention.

The Lord has been faithful and I’m so thankful! Working as Area Minister for the Atlantic United Baptist Convention (now CBAC), receiving Acadia Divinity College’s Alumni Distinguished Service Award, and recently being awarded a Certificate of Recognition from the Government of Nova Scotia are some of the opportunities I treasure.

God has blessed me with a wonderful wife, Ethel (Harlow) Beers, and we were married in 1967. We have four beloved children (three of which went to Crandall) and eight precious grandchildren. This past August, Ethel and I celebrated our Golden Wedding Anniversary – God is good!

First and foremost, UBBTS provided me with a solid foundation for life. The training at UBBTS prepared me for my undergraduate degree and theological studies at Acadia University. Through UBBTS, I made many life-long friendships, which have been an integral part in shaping me for ministry in Christ’s name.