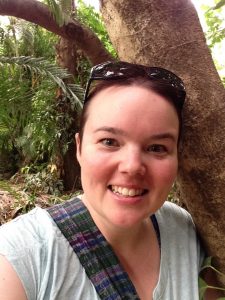 After graduating from ABU, I went to Alberta and received my diploma and certified journeyman certificate as a hairstylist. In 2009, I went on a mission trip to Mazatlan, Mexico. In 2012, I returned to take an intensive missionary training program with “Youth With A Mission” (YWAM). This is when I connected with the non-profit organization, “El Pozo de Vida” (which means The Well of Life), who works with victims and survivors of human trafficking. In 2013, I worked at Crandall University in the Registrar’s Office and Athletics Department while I was preparing to move to Mexico City.

Since 2014, I’ve been serving with El Pozo de Vida, where I ran a hair salon ministry in La Merced (the largest of 7 red light districts in the city). In 2015, we started a jewellery project in the salon called Nunayú (which means freedom), that currently employs 12 survivors. The women come every day and receive a fair wage to make jewelry. Nunayú is now located in a professional office building outside of the red light district, and I am currently in charge of this project.

It has been an incredible and difficult challenge, but it is an honor to be part of the restoration process of these amazingly strong and courageous women.

My time at ABU was integral to my foundation of faith, as I became a Christian a year before I started university. It was the Cross Cultural Certificate, though, that played a major part in where I am today. The internship portion of that program led me to Brazil and changed me in ways I never could’ve imagined!

As a student, I had no idea God’s plan would include my random education, work experience and volunteer experience… but He made it come together and equipped me for this very special job in one of the largest cities on earth!