The 2016 Distinguished Alumni Awards were presented to Rev. David Morehouse ‘81 and Rev. Dr. Malcolm Card ‘63 on Friday, May 6, 2016 at a special dinner in their honour on campus at Murray Hall. Morehouse and Card joined the ranks of past recipients of the award such as Dr. Seth Crowell, Laura E. Selig and former Premier David Alward.

The Distinguished Alumni Awards celebrate the contributions Crandall alumni make to their communities and professions. They recognizes truly outstanding accomplishments of its alumni and the pride they bring to their alma mater. These awards are presented annually to deserving alumni. 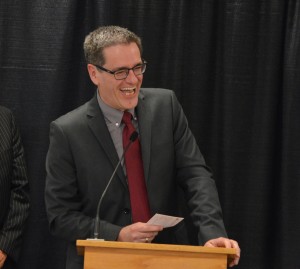 David Hinson Morehouse sensed a call to ministry at a young age. Spiritual mentoring and encouragement during his childhood and teenage years elevated that desire.

While attending Atlantic Baptist College in the early 1980’s, David would not only be challenged academically but be inspired to greater global awareness and a stronger pastoral call. Natural leadership abilities were evident during those college days and sharpened while serving as Student Council President, on sports teams and amongst his peers. Those were formative years.

God’s plan continued to unfold with marriage to his lifelong friend, Nancy (McLeod) Morehouse, completion of his Bachelor of Arts in Philosophy degree at St. Thomas University in Fredericton, NB and his Master of Divinity degree at Regent College in Vancouver, BC.

Responding to a pastoral call back in Moncton, David embarked in local church ministry, at what was known then the Allison Baptist Church. Here he became known as a visionary and pastoral leader, a creative communicator and missional experimenter. Over his nearly 30 years as Lead Pastor to now the Journey Church, his giftedness has challenged numerous audiences to reflect God’s love now and God’s purposes to future generations. Passionate to reach and equip, David has graduated from the Arrow Leadership Program, served as Board Chair for the Moncton Pregnancy Resource Centre and Crandall University and currently serves on the Board for World Vision Canada.

David and his wife, Nancy are proud parents to Megan, Thomas, Brett and Wesley.

Given to honour alumni for outstanding accomplishments, devoted service and loyalty to Crandall University, this Distinguished Alumni Award is presented this 6th day of May, 2016 to Rev. David Hinson Morehouse. 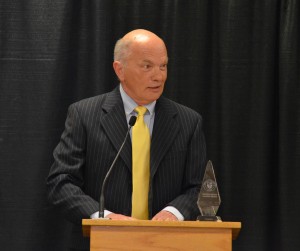 Malcolm Wyman Card, alongside eleven other classmates, graduated from the rural community Dorchester Consolidated School in 1962. With aspirations to leave the simple lifestyle behind, he headed to the big city of Moncton, where, providentially he ended up at the United Baptist Bible Training School on Salisbury Road for a pivotal year when critical relationships were formed, self- examination and personal growth was experienced.

After obtaining his Bachelor of Arts degree in 1965 from Gordon College in Massachusetts and his Master of Divinity degree from Gordon-Conwell Theological Seminary in 1969, Malcolm accepted a call to ministry as Senior Pastor in Perth Andover, NB. During his first pastorate, he and Patty welcomed their first daughter, Cheryl and within two years while in the midst of a ten year term as missionaries with Canadian Baptist Ministries in Indonesia, their second daughter, Sarah was born and later their son, Robert.

During home assignment in 1982, Malcolm accepted the position as Canadian Baptist Ministries’ Representative for Ontario and Quebec until 1986 when he became Executive Staff in the CBM Toronto office. Characteristic of Malcolm’s tenacity he also achieved his Doctor of Ministry in 1985 from Eastern Baptist Theological Seminary in Pennsylvania.
By 1998, Malcolm sensed God’s call back to the local church where he served at Woodstock Baptist Church as Senior Pastor until 2004 while also offering leadership as President of the Convention of Atlantic Baptist Churches between 2002 and 2003.

During retirement since 2011, Malcolm has offered leadership in the local church as interim pastor at Hillsborough Baptist, Church Relations Representative and Adjunct Professor at Crandall University, Trustee of Acadia Divinity College and more recently has served in Men’s ministry at Hillside Baptist Church.

Given to honor alumni for exemplary accomplishments and service, while encouraging and challenging others and for loyalty to Crandall University, this Distinguished Alumni Award is presented this 6th day of May 2016 to Rev. Dr. Malcolm Wyman Card.