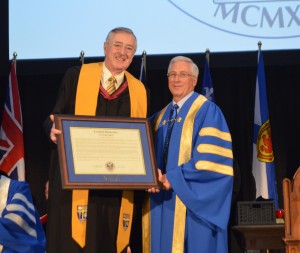 On May 7, 1946, exactly 70 years ago, H. Ward White was born in St. Stephen, N.B., the first of three sons, to Howard and Amy White. While still young, Ward’s family moved to Bath, N.B. and then Fredericton, N.B., where they remained for the duration of his childhood and teenage years. As a youth he developed a real love for the game of basketball, and it has been an important part of his life ever since. It was also as a mid-teen that Ward made a profession of faith and was baptised, but only later, as a young adult, under the ministry of Dr. Harold Mitton at Brunswick Street Baptist Church, did this faith strengthen and grow.

Ward graduated from Fredericton High School in 1964 and went on to spend a brief time playing basketball and studying at Acadia University and then the University of New Brunswick. After a short work hiatus, White was drawn to the profession of teaching and enrolled at St. Thomas University, completing his Bachelor of Teaching degree in 1970, followed by his Bachelor of Education in 1974. Over the next eight years he would complete two Principal Certificates, for Elementary and Secondary schools, as well as his Master of Education degree from the University of New Brunswick in 1982.

From the time Ward began his first teaching position at Petitcodiac Regional High School in 1970, his working and personal life was focused on the education and development of children, teens, and young adults. His leadership capacity was clearly evident from the beginning of his teaching career, since after only one year of experience he was invited to The only passion that surpasses Ward’s love for basketball is his love for His Lord and Saviour and his desire to serve Him through His church. His various levels and forms of involvement are myriad, but a few notable roles include deacon, Sunday school teacher, Church Moderator, and leader within the Christian Service Brigade. At a broader church level, he also was the Moderator of the Albert County Association, and within the parachurch realm he has been an active Gideon for 35 years. His Christian service has also extended to both community and civic involvements. He has, for example, served as Councillor for the Town of Riverview and, even more notably, been a volunteer with Department of Natural Resources for 39 years. 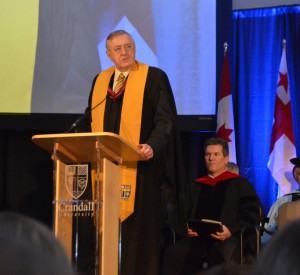 Family has always been a central component of Ward’s life and raison d’etre. He and his wife, Esther, will celebrate 45 years of marriage this July 10th. They have four children – Jacalyn, Joel, Daniel, and Joanna. They also have 10 grandchildren, just enough to start a basketball team.

H. Ward White has long been a friend of Crandall University. He has been a Board member for 12 years at various intervals, including service as Board Chair for a term. Also, he was a long-standing committee member that managed the funds raised through the Stephen S. Steeves Foundation. Throughout the years Crandall University has been blessed with support from this Foundation in millions of ways. Ward even took on the role of Head Coach of our Varsity Men’s Basketball team at a key time of transition for our program. 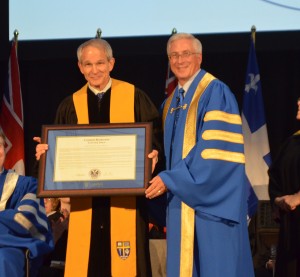 For twenty-six years, Dave Toycen has served World Vision Canada, which is Canada’s largest humanitarian relief, development, and advocacy agency. For the last eighteen of those years, he has served as president and chief executive officer for World Vision Canada, where he has guided the organization into dramatic growth in its efforts to follow Jesus by serving the world’s poor. Toycen’s commitment to holistic ministry is rooted in his personal devotion to Jesus Christ. His care for the poor is inspired by Isaiah’s vision of a new earth where poverty and despair are eradicated (Isaiah 65) and by these words of Christ: “let your light shine before others, so that they may see your good works and give glory to your Father in heaven” (Matthew 5:16).  He believes that it is critical to give Canadians, and Christians in particular, the opportunity to identify with and to serve the poor through personal commitment, prayer, and advocacy.

Influenced strongly by the biblical call for justice, Toycen has led World Vision Canada into significant advocacy and public policy work, with an emphasis on issues affecting children. Through regular dialogue with government and business leaders in Canada and overseas, World Vision works for long-term structural change in areas such as child and maternal health, the rights of girls, and the protection of children in armed conflict. He has spoken before the World Bank, and he has met with heads of state, key global executives, and development leaders to discuss the well-being of the world’s children.

In addition to his commitment to overseas development and emergency relief activities, Toycen has championed the agency’s Canadian efforts, including ongoing work with church leaders and refugees. Prior to his appointment as president in 1996, he was World Vision Canada’s executive vice-president and vice-president of donor development for eight years. In his two decades as a leader with the agency, income has increased, and the number of children sponsored through World Vision Canada in those years has risen. His career with World Vision internationally has spanned more than forty years, during which time his strong leadership has been felt throughout the world. Under his leadership, more than $4.0 billion has been raised in aid and development for the poor; currently Canadians sponsor over half a million children around the world.

Indeed, Toycen has provided on-site assessment and support during almost every major humanitarian disaster of the past two decades.  Due in large part to his efforts through his strong support for child and maternal health, the rights of girls, the protection of children in armed conflict, and the welfare of the world’s poor, he was awarded the Order of Ontario in 2011. 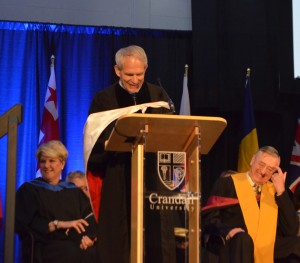 Toycen has written about this servant leadership in his 2004 book, The Power of Generosity, which draws from his wide experience and challenges readers to become more engaged in the world and to develop a more generous way of life.  A Canadian citizen, he holds a Bachelor of Arts degree from Lawrence University in Wisconsin, and a Master of Divinity degree from Fuller Theological Seminary in California.  He also holds Honorary Doctorates from Tyndale University College and Seminary in Toronto; the Church Divinity School of the Pacific in Berkeley, California; and Wycliffe College, University of Toronto.

In addition to their international service, Toycen and his wife, Diane, are active members of their local community, within which they also participate in the life of their faith community of Trinity Anglican Church in Streetsville, Ontario. The couple has two grown children and are blessed with three grandchildren.