Public Lecture Explores Challenges, Outlook of Women in Society and the Church

Public Lecture Explores Challenges, Outlook of Women in Society and the Church 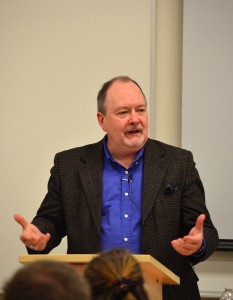 At the centre of the event, the second in a new series of lectures, was a talk given by Dr. John G. Stackhouse, Jr., the Samuel J. Mikolaski Professor of Religious Studies at Crandall University. Stackhouse (Ph. D., University of Chicago) was formerly a member of the faculty at Regent College, Vancouver, B.C.

Dr. Stackhouse is a commentator on issues relating to Christianity and society, with numerous media appearances on major outlets. He has lectured at several institutions, including Harvard University, Yale University, and Stanford University.

After an introduction and welcome remarks from Dr. Sam Reimer, who recently spoke at the first lecture in this series, Dr. Stackhouse took the floor and presented findings on why women do not lead in society and in the Church. He concluded with suggestions on how to proceed to a better position for women in our workforces, churches, and homes. The talk was followed by a response period from two panelists, Dr. Cathy Rogers (MLA for Moncton South, Minister of Social Development and Minister of Healthy and Inclusive Communities, and former Assistant Professor of Sociology at Crandall) and Dr. Elissa Rodkey (Assistant Professor of Psychology at Crandall). The evening was concluded with a short Q&A period, in which Dr. Stackhouse and the panelists interacted with questions and prompts from the audience.

The event also served as a launch for Dr. Stackhouse’s latest book, Partners in Christ: A Conservative Case for Egalitarianism (InterVarsity Press, 2015). 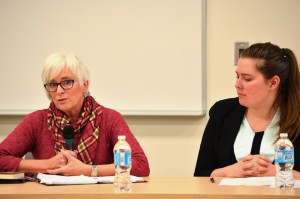