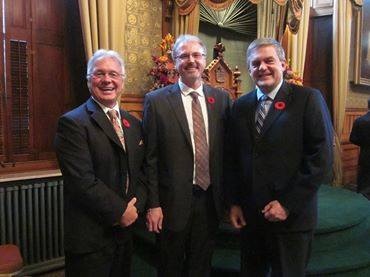 Many people do not realize that the Legislature for the province of New Brunswick has its own chaplain.  At the beginning of this new session of the government, a new chaplain was appointed.  This time, he’s one of our own alumni.

On Tuesday, November 5, 2013, Rev. Daniel Walton, Pastor at Jemseg Baptist Church, officially took on this new role.  Each day members of the Legislative Assembly are in session, the chaplain begins the day’s events with prayer.  Prayers are said in both English and French and include The Lord’s Prayer; since New Brunswick is a bilingual province.  They are rotated in the languages they are said.

The chaplain is led in the parade as the Speaker of the House and the Clerks enter the chamber to begin the day’s session, led by the Sergeant-at-Arms.  The prayers are the first order of business each day.  Once completed, he takes his seat near the desk of the Sergeant-at-Arms’.  He may be, and from time to time is, approached by members of the house and asked to speak with them or thanked for his presence and participation.

Being in this position, the chaplain has other opportunities as well.  He is invited to join with a number of MLA’s who get together each week for encouragement.  Opportunities are also given for the chaplain to give comfort and spiritual support to any staff members who are experiencing difficulties such as the loss of a family member.

Many times words of thanks are extended to the chaplain from the MLA’s for his presence and encouragement to them.  It is obvious that these are genuine comments and his participation is appreciated.

It is important to be praying for those who give leadership in government.  It’s not an easy job.  Tough decisions are made on a regular basis.  Please be praying for each of the MLA’s as they represent the voters and give leadership to the province.  Each of them need to be prayed for on a regular basis.  Let’s thank God for a province that sees the value in prayer and inviting the presence of God each day as it’s work is done.