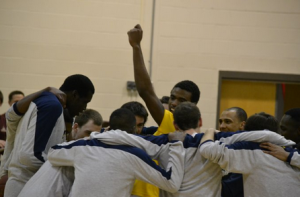 Anticipation has never been higher for the Chargers community to watch the men play here at Crandall.
This weekend was a chance for many of the students and fans to see them play first hand, and they were not disappointed!

Saturday the Chargers faced their local rival – the Mount Allison Mounties.  Both teams arrived 2-0, but only the Mounties left with a blemish on their record.  With high flying dunks, and massive blocks the crowd was amped as their Chargers went on to win 73-58.  It was Osman Barrie leading the way for the Chargers, dropping a team high 27 points, with Darrio Dean, Nathaneal Fells and Sherif Bah adding 8 points each.

Sunday was the second game of home opener weekend, as visiting team DAL AC Rams arrived on campus.  The Chargers came out fast and furious securing a 29-15 point lead in the 1st quarter, and they never looked back.  Finishing the game 96-54 and improving their record to 4-0.  Leading the team again with 20 points and 12 boards was Osman Barrie.  Followed with depth from the bench as Jordan Cromwell added 15, and Sherif Bah with 11.

The Chargers will face what might be their toughest opponent this Saturday, as they travel to PEI to play Holland College (3-1). They will then be returning to Moncton to host Holland College on Sunday, November 24th at 4pm on the Crandall court.

This is must watch basketball as both team head into this weekend Nationally ranked in the Canadian Collegiate Athletic Association National Rankings. http://www.ccaa.ca/rankings-s15103