At a special ceremony held on February 22, 2013 at Crandall University, three outstanding faculty members became the university’s first Professors Emeriti.  Dr. Douglas Mantz, Dr. Carol Thorne, and Dr. Gary LeBlanc were each recognized for their longstanding service to the university and its students. 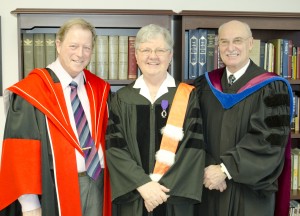 Dr. Mantz served for 27 years as a professor of English at Crandall after previous professorships at Mount Allison University, the University of Waterloo, and the University of Saskatchewan. As a former graduate student of Northup Frye at the University of Toronto, he was one of the key individuals who helped initiate the now renowned Moncton Frye Festival, serving as co-chair in the festival’s initial year. Drawing from his academic speciality in landscape literature, he was also the founder of Crandall’s annual Foliage Day, a time when afternoon classes are cancelled to allow students, faculty, and staff to enjoy a meditative walk celebrating the beauty of the fall landscape. Dr. Mantz was also the originator of a formal partnership with Regent’s Park College of Oxford University, allowing Crandall students to spend a full semester studying in England with access to the Oxford University campus and its many academic resources.

Dr. Carol Thorne started a second career at Crandall University in 1988. After almost two decades of linguistic and translation work in Cameroon and completion of her doctoral studies at the world-renowned Sorbonne University of Paris, Dr. Thorne spent the next 17 years as a full-time professor of Linguistics, French, and Anthropology at Crandall University, where she particularly enjoyed opening students’ eyes to the various cultures and linguistic practices of the world. Dr. Thorne also worked diligently to promote the study of French language, both within her French courses and during her involvement with the Moncton Alliance Française, including a term as President. For her faithful commitment as a French teacher and an advocate of French language and culture, she was named by the Government of France as Chevalier in the order of the Palmes Académiques and decorated by the French ambassador to Canada in December of 2004.

Dr. Gary LeBlanc is the longest serving faculty member in Crandall University’s history. His 42 years with the university include 35 as a full-time professor of Sociology. With an M.A. in Economics from the University of New Brunswick and a Ph.D. in Sociology and Family Studies from Florida State University, Dr. LeBlanc brought rigour and understanding to his courses in both disciplines. In the early years of the university, Dr. LeBlanc also served for almost two decades as the Dean of Campus Life, overseeing all non-academic programming for students. Dr. LeBlanc also served for many years as a valued faculty member of the President’s Cabinet, which was the body that set the vision and strategic direction for the university. As a result, he played a significant role in new program development and campus expansion as the university moved to its present site on the Gorge Road of Moncton in 1996.