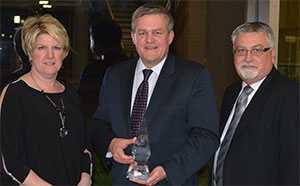 David Nathan Alward, born to Rev. Ford and Jean Alward, on December 2, 1959, lived in Beverly, Massachusetts only six months before moving to New Brunswick. Being the son of a minister, David, along with his siblings moved to rural communities throughout New Brunswick and Nova Scotia. Petitcodiac, Glace Bay, Riverside Albert, and Nackawic offered him childhood experiences that would over time shape and build his foundation for life.

At a young age, David accepted Christ as Lord and Savior at Camp Wildwood; found nestled along the shore of the beautiful Bouctouche River. In later years, during a camping experience at Greenhill Lake Camp, in York County, David made a decision to enroll at Atlantic Baptist College.

In the fall of 1977, David joined fellow classmates for a life changing year at the small liberal arts college on the Salisbury Road in Moncton. While under the leadership of President, Dr. Stuart E. Murray and teachers, David was not only challenged academically but thoroughly enjoyed extracurricular activities such as hockey, basketball, volleyball, and badminton. Friendships grew quickly in those first few weeks of the academic year but tragedy struck with the untimely death of his friend, Stephen L. Henry leaving an indelible impression upon David’s life.

After the conclusion of his academic year at ABC, David enrolled in another Christian Liberal Arts school; Bryan College in Dayton, Tennessee to complete studies in Psychology before being accepted at Trinity Evangelical Divinity School in Deerfield, Illinois. David eventually returned to Canada working for Canada Customs and Human Resource Development Canada while he and his wife, Rhonda reared two sons; Jonathan and Benjamin.

David worked as a federal civil servant from 1982 to 1996 before starting his own business. After being elected to the Provincial Legislature as a Progressive Conservative in 1999, he would go on to serve as Minister of Agriculture, Fisheries and Aquaculture before assuming the office as leader of the Progressive Conservative Party of New Brunswick on October 18, 2008. On October 12, 2010 he was elected New Brunswick’s 32nd Premier. In addition to his responsibilities as Premier he also holds the portfolios of Minister of Intergovernmental Affairs and Minister for Aboriginal Affairs.

Given to honor alumni for exemplary accomplishments and service this Distinguished Alumni Award is presented this 4th day of May, 2012 to the Honourable David Nathan Alward, Premier of the Province of New Brunswick.